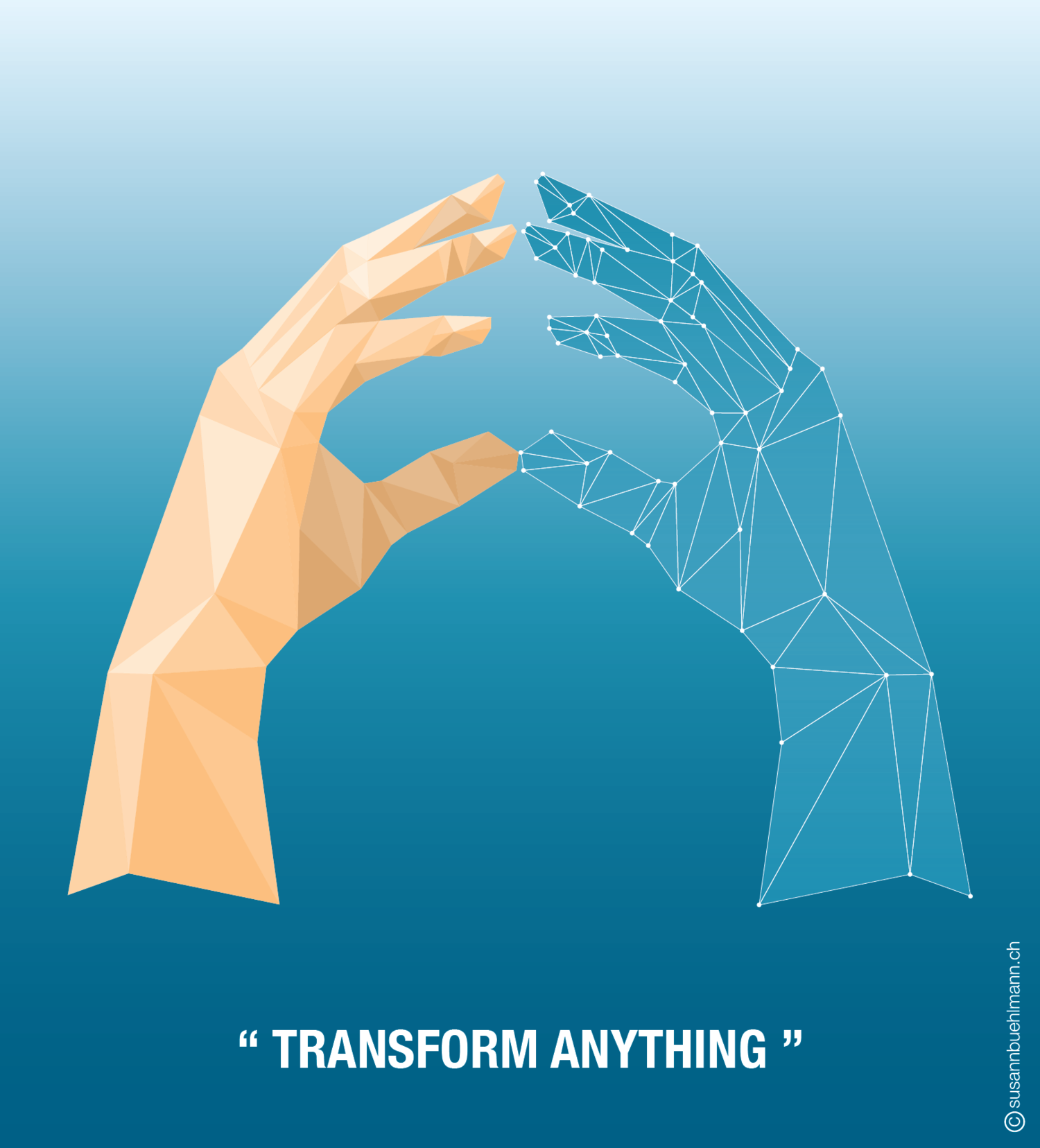 Building Global Bridges With You

We are practically on the way from the age of information to the age of disinformation. The importance of experts is getting lost in view of the wide range of experiences available online.

In 1966, Karl Steinbuch, a pioneer of digitization, drew a picture of society that will promote ubiquitous information and objectivity through communications technology, and rational decisions will determine people's actions. He corrected this in 1989 and advocated a second enlightenment. At present, it seems that the Informed Society is once again powerfully on the brink of collapse. Data protection and ethics are moving to the top of the agenda of a hyper-networked society.

The concept of digitization is contextually strained in various dimensions. Are we being digitized, is it digitizing us, or have we been introducing techniques since the beginning of human development that change the way we live together on the planet and ourselves from in between? The availability of knowledge through technology can be seen as one of the essential drivers of a process of enlightenment and democratization that makes it possible to overcome dogmatic chains of institutional interpretative sovereignty. However, side effects and collateral damage do occur.

No longer do a few people in special places determine what is to be done. A growing number of people can take part in the process of generating knowledge and analyzing and describing relationships. This process is not only a revolution for the sovereignty of interpretation in religion, state, science and education, but also in the shaping of relationships and living together in society. The availability of information and the discarding of dogmatic chains enable an increasing individualization. The importance of experts is being lost in favour of a wide range of experiences available on the Internet. People with the ability to create information paths, to assign meaning to found data and to make decisions feel they have a degree of control that seems to be limited only by the availability of their resources. This availability may remain the only constant.

After the world view of contexts had changed – Copernican turn –, the way people think and speak about contexts – linguistic turn – gained in importance. Automated thinking and the associated acceleration heralded the digital turn to the “Next Society”, which is increasingly characterized by the dissolution of information asymmetries. The increasing availability of information is changing consciousness, especially where a secure living environment is associated with a certain level of prosperity.

People who have resources and thus prosperity would like to exist as long and as healthy as possible in a largely intact environment. Accordingly, since the 1990s there has been a sensitization regarding the shaped lifestyle, which is increasingly reflected in the mirror of the Nets. Reporting on the effects of anthropogenic activities with regard to climate change is leading to a change in awareness and a beginning change in behaviour, especially in mature economies. This effect is characterized above all by the fact that the standard of living achieved can be maintained as far as possible without sacrifices. Behavioural adjustments can be expected initially in those areas where individual transaction costs remain as low as possible. Individuals increasingly expect other people who provide services for them to behave adequately and appropriately in order to secure the status quo of the planet. Thus, the pressure is growing with regard to a sustainable and transparent approach for which the “Next Society” provides the technological means.

Something can happen to an individual and they are able to act. This is due to the fact that it is defined by society. In the early tribal cultures in Europe, private communication took place around the circle – the place peripherally between individuals or groups – during meetings in special places that have a special effect on the participants in their society. If someone wanted to share information or share or make decisions with everyone, they went to the center. One person spoke to the many who listened to and signaled approval or rejection. In the “Next Society”, the center dissolves and communication potentially takes place decentrally among all (Hénaff, 2017). In its internal complexity, the network provides a calculus of uncertainty, within which decisions must be permanently made by the actors.

Thus offers of relationships and/or meaning are accepted, rejected or reinterpreted. It is no longer only the content that counts, but the context in which the interaction takes place.

The identity of an element in the network is not determined by substance, but rather by its relationship with other elements to an extent never seen before. Depending on the basic attitude of the individual actors, this results in a more or less emotional/rational relativism. This uncertainty is based on the fact that all actors must at all times expect to lose attractiveness and/or reputation and to be replaced by others.

This changed the existential determination a particular place, bounded by a horizon, had for the environment of the individual. If the individual moves towards the horizon, the line at the top and bottom shifts, and if a point is determined, a left and right of it can be located. Through the use of digital devices that bridge the data exchange of different loci and times, an Internet of Horizons is created. The tribal society puts the individual in the limelight by belonging to a group on a territory with boundaries of space and time. Modern society develops the idea of self-knowledge further, in order to be able to understand what happens to the individual and what happens around him. This happens in the awareness that his actions leave traces. In the “Next Society”, the singular behaviour of an individual is reproduced en masse in recurring patterns. On the one hand, the individual in this situation tries to overlook this, which he/she gratefully accepts in other situations, because she/he wants to make the difference like others. Privacy can be interpreted as the absence of determination. This indeterminacy, characterized by self-determination as well as by other and social constraints, creates the space for an active decision between absence and participation. Someone who can be reached through modern means of communication and networking, but who is not bound by them, can take advantage of the space between absence and active participation. In order to maintain an individual's ability to make decisions, this central achievement of modern society must be defended in the form of maintaining privacy.

Information is increasingly becoming a resource for self-optimization and self-exploitation with addictive potential, where algorithms and automated thinking can calculate and stimulate the next budding desire before the individual himself becomes aware of it. This leads to intermittent positive and negative reinforcement, opens up the possibility of creeping behavioural influence and bears the great danger of individual mass manipulation. If everyone receives his or her own truth, the room for compromise shrinks at the same time. Automated, externally curated well-being and the valorisation of attention in the (a)social media, lead more and more to a competition for self-expression of personal optimization, which does not stop at cosmetic surgery and self-destruction after depression.

Through the calculability of potential actions and desires of individuals in experiential communities, these become apparent before they enter the consciousness of the individual. This concept is defined by Lecinski (2014) in "Zero Moment of Truth", in which all previous experiences begin to have an effect the moment a potential decision is updated. Previous experiences and actions thus influence follow-up actions and social contacts. The question that is raised here is: What remains of privacy? Every networking creates the risk of mirroring one's own identity on the net or not. According to Baecker (2018), in the new present, privacy is perhaps the only thing that can be presented as an incalculable negation of the expected.

The original business model of technology companies in this field, has changed from selling software to selling the attention of users. Thus, the human being himself becomes an extracted resource. The goals are: Extend screen time, enlarge network, consume advertising, adapt behaviour. The resulting increasing surplus of control is exploited by the platform economy as a kind of surveillance (Zuboff, 2014) and exploration capitalism to overcome territorial states in the form of digital states. Through the operation of platforms, digital states emerge that transcend physical borders and challenge the societies bound to states and territories with their rules not only in terms of value creation.

Automation with the vision of complete transparency and individualized products is not only changing the world of work. Wherever automated thinking is performed by machines programmed and constructed by humans, human doubt is abolished. The moment the transition to the "Next Society” becomes palpable to many, there emerges an idea of the opportunities and risks that the changed business models offer and of how the issues of data protection and digital ethics could be dealt with. In the rear-view mirror of reflecting social developments, it becomes clear that something is progressing that is increasingly changing the world.

Lecinski, J. (2014): Zero Moment Of Truth: Why It Matters Now More Than Ever. Micro-Moments. www.thinkwithgoogle.com/marketing-resources/micro-moments/zmot-why-it-matters-now-more-than-ever/ 30.07.2019

Zuboff, S. (2019): The Age of Surveillance Capitalism. The Fight for a Human Future at the New Frontier of Power. Profile Books, London