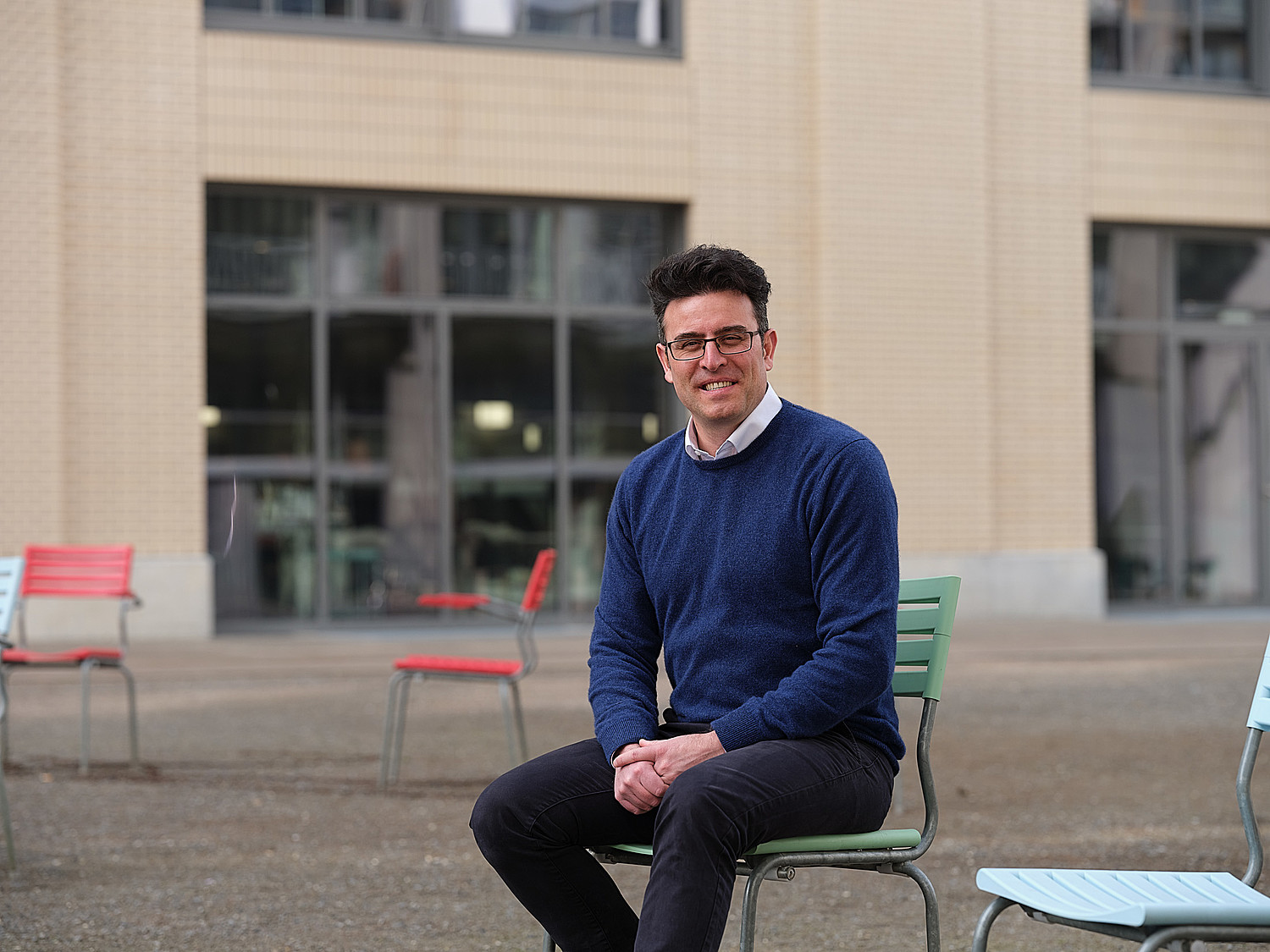 He’s both a midwife and a lawyer

From Tenerife, via England and Austria, to Winterthur: Jonathan Dominguez Hernandez has spent time in many different places all over Europe. And his professional career has been no less varied. Since last summer, he has been working as a lecturer on the Master’s programme in Midwifery at ZHAW.

This is not the first interview that Jonathan Dominguez Hernandez has given. “The male midwife from Tenerife” caused a stir already in his previous professional posts in England and Austria. The 42-year-old gladly says yes to media requests in a bid to inspire others. “I’d like to encourage men to take up this profession if they have a passion for it.”

But there’s more to this Spaniard than just a man working in a woman’s domain. The lecturer for the Master of Science in the Midwifery programme at the ZHAW School of Health Sciences can look back on an exciting career. He started out as a nurse on his home island, the Canary Island of Tenerife. There, the son of a builder repeatedly looked after mothers and their newborns, since nurses are always responsible for postnatal care in Spain. He adored this work.

As much as he loves the sun and the sea, Tenerife grew too small for him over time. He moved to England. There too, he worked in nursing to begin with. It was the award of a grant that gave him the opportunity to become a midwife. He worked in the north of England where he was the very first male midwife. “I was met with every conceivable reaction from the pregnant women. Some were surprised at first, but then delighted.” Others refused a male midwife – on religious grounds, for example or because they were not comfortable with the idea. “That was no problem and I swapped with a female colleague when that happened,” the self-confessed feminist explained.

The approach he adopts as a midwife – the job title applies to men too – is one of listening to the woman. He heeds her wishes and needs. “Women ought to experience their self-efficacy while giving birth. I would tell the women ‘I’m there for you and will try and fulfil your wishes.’” For him, that also meant administering epidural analgesia (EDA) to cope with the pain if it meant that a woman could have a good birth experience. “I naturally inform them about the risks, but in the final instance it is the woman herself who decides.”

“It’s a unique experience to support a woman in bringing a baby into the world.”

In London, where he headed an outpatient clinic run by midwives for pregnant women with communicable diseases and addictions, he campaigned for women with HIV not to be automatically registered for a caesarean section but to be given the option of having a vaginal birth. It’s a unique experience to support a woman in bringing a baby into the world, says Jonathan Dominguez Hernandez with a glint in his eyes.

In addition to his training as a midwife, Jonathan Dominguez Hernandez has a second mainstay, namely medical law. It was a tragedy that prompted him to take up his law studies. A woman died while giving birth by caesarean section in a hospital in a suburb of London. "I was looking after her at the beginning of the birth, then my shift ended and I went home. The next morning, everyone was in turmoil because she had died.” An investigation was conducted with all the employees subjected to intensive questioning. “In England, people are very quick to take legal action against a hospital,” Jonathan Dominguez Hernandez explains.

“I was interested in the rights of midwives. That’s why I studied medical law.”

“I was interested in finding out how I could protect myself and what rights midwives have in such cases. I therefore graduated as a Master of Law in medical law.” He completed his legal internship in a law firm working in this field. "I found it very interesting, but didn’t like having to defend a person who I knew had definitely committed a medical error," he recalls. So he went back to work as a midwife.

It was in England that Jonathan Dominguez Hernandez met his now wife, a midwife with Austrian roots, who had lived in the British Isles for more than a decade. When the midwife couple’s first child was on its way, they moved to Vorarlberg in Austria. “My first thought was, I can’t do this – I don’t speak German!” says Jonathan Dominguez Hernandez. But it worked out and, while his wife took up a post as a midwife, he first of all learned German. Later, he worked as a lecturer in health sciences at Vorarlberg University of Applied Sciences.

But his main passion was still for everything to do with midwifery. And this is why, in August 2021, he arrived at the ZHAW Institute of Midwifery. Here, he teaches the Master's students, providing them with evidence-based knowledge (knowledge based on proven effectiveness and interrelationships) about pregnancy, childbirth, and the postpartum period. His lectures focus on advanced practice skills, including the design and implementation of a midwife-led care model for pregnant women in complex situations, such as a high-risk pregnancy.

“Midwives can do more than they sometimes realise and they should also demand new roles.”

“I really enjoy teaching. Students on the Master’s programme have, after all, already qualified as midwives. We can then go into the topics in depth,” says Jonathan Dominguez Hernandez. He looks back fondly at his own Master’s degree studies. “I had been working with a Bachelor’s degree for many years and the options open to me in midwifery changed greatly once I had completed my first Master’s programme. I was better informed and able to offer the women more than had been the case beforehand. I always kept the evidence-based theory in mind and that gave me a helicopter perspective, as it were.” In addition to his Master of Law, he also holds Master’s degrees in Public Health and Advanced Nursing Education.

He would like to tell the current Master’s students that midwives can do more than they sometimes realise and they should also demand new roles. “Midwives could assist in the development of obstetrics guidelines, for example.” Jonathan Dominguez Hernandez is speaking from experience here. Due to his work in other countries, he knows that “in England, women generally go to a midwife for prenatal care whereas in Spain midwives are also integrated in breast cancer screening. Similar models would also be conceivable in Switzerland.”

The combination of lecturing and research that is customary at Swiss Universities of Applied Sciences, very much appeals to him. And if everything goes according to plan, he will have gained a doctorate by 2025. He has been accepted on a PhD programme at the University of Lancaster (GB). In my PhD, I’m setting out to examine women’s fear of childbirth.” What is important for him is that the women themselves should have the opportunity to express their views through digital storytelling for example.

As a father of an eight-year-old daughter and a four-year-old son, Jonathan Dominguez Hernandez won’t have much time to be bored in the near future. Don’t you miss Tenerife? “Of course,” he says. “But life there has become hard for the locals.” In his rare moments of spare time, he shares a passion for winter sports with his children and wife – “snowboarding reminds me of surfing in Tenerife.”